“Follow the Money” is a phrase that became popular following the 1976 film “All the Presidents Men.”

So, let’s “Follow the money” in healthcare to help us understand how Medicare and Baby Boomers impact your Employer-based Health Insurance costs.

Before doing so, it’s important to understand a few dynamics in our country.  First, consider the demographic shift involved with the baby boom generation. When Medicare was started in 1966, the U.S. had approximately 19 Million citizens over the age of 65. By 2020, that number had grown by over 300% to 62 Million.

In the below birthrate chart, note where “the baby boom wave” is turning 65 today.  In short, we have a growing number of Medicare-eligible expected over the coming decade. 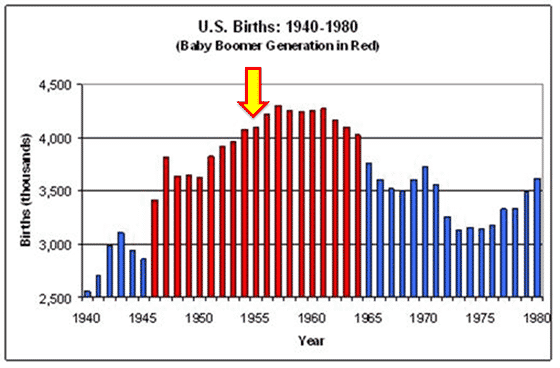 As a result, the current structure and demographic trajectory will lead to an exhaustion of the Medicare Trust Fund by 2026…some are now saying even earlier.

Regardless of one’s political party, the issue of Medicare solvency matters a great deal. Yet, we still need to “follow the money” to fully understand how all Americans are impacted by this debate, including those under the age of 65.

That brings us to a second important dynamic involved in our country’s healthcare structure. That is, at what reimbursement rate are hospitals and doctors paid by Medicare compared to private insurance, including employer-based health insurance?

While it can be far higher in some situations, on AVERAGE, employer reimbursement rates to hospitals and physicians are 241% of Medicare. Or, for every one dollar spent on Medicare, for the exact same service, $2.41 is charged to the employer-based health insurance plan. Here are some examples of various healthcare segments:

To believe Medicare is more efficient would be to misread the situation. Effectively, the employer-based health insurance plans are subsidizing the inadequate and government-controlled reimbursement rates of Medicare and Medicaid.  Follow the Money – – It’s a hidden tax.

More specifically, a hospital system shared these numbers that help us Follow The Money. 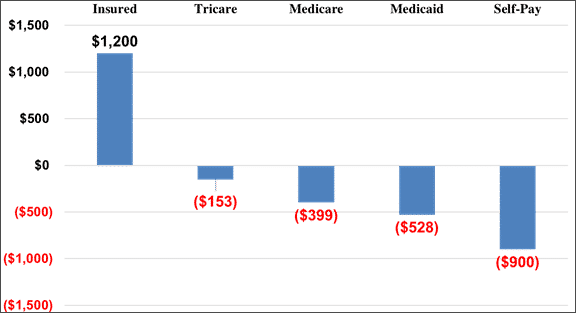 For every patient with Medicare in this hospital system, the hospital LOST $399 per patient. However, that same system made approximately $1200 in profit from patients with private insurance.

And this brings me to my final point.  When politicians (from both parties) talk about either a Medicare Option, Single Payor, or about protecting the Private Insurance Market, always consider this question:  At what reimbursement rate?   Why?  Because if a Medicare option is priced at the current (inadequate) medicare reimbursement rates, hospitals will be harmed, possibly closed, especially in rural areas. And, if the private insurance model is protected in its’ current form (e.g., whereby it continues to subsidize Medicare), the employer premiums required to prop up Medicare will be put under even more pressure by the demographic shifts we discussed earlier.

And that’s the point for today – – as we “Follow the Money” in healthcare and we see our private insurance premiums going up, let’s make sure we have an honest discussion around who is paying for what…and let’s make sure the root issue of subsidies is brought into the open. Thanks for following the money!